Getting workers off steep hills, away from hazards on the ground, is still proving to be a tough ask for some crews around the country, particularly when it comes to extraction, with manual breaking out often required where there are no alternatives.

But it doesn’t necessarily have to be like this, according to leading contractor and new technology champion, Dale Ewers.

“We operate 15 crews around the country, sometimes in very difficult locations and we’re able to use mechanisation in up to 98% of those situations in all but one of ours crews – and that crew still does around 80-to-90%,” he says.

The challenges of keeping people safe prompted Dale to start up a company called DC Equipment, which has developed a number of solutions to mechanising steep slope harvesting, including the Falcon Winch-Assist system and the Falcon Claw grapple carriage.

It was the safety of his people that led Dale to come up with a workable grapple carriage ten years ago. In spite of being told by many in the industry that it would never work, the Falcon Claw has gone on to become a key piece of equipment for many crews in New Zealand and overseas.

The Falcon Claw has also spurred a number of others to design and build their own grapple carriages and release them to the market.

“That’s good,” says Dale of the increased competition. “It shows that we’ve been on the right track and, quite frankly, I’m not bothered what colour grapple carriage people buy, so long as they adopt the technology. It means that we are putting fewer people into dangerous places.”

But the adoption rate is not growing anywhere near as fast as it could, for a variety of reasons: some older towers either don’t have water cooled brakes or just don’t have enough power to lift a skyline with a carriage; contractors are not in a position financially to adopt the new technology; and, of course, there’s always challenging terrain and other obstacles.

Yet Dale says there are ways around those roadblocks.

“I struggle with the theory that tower haulers cannot run grapple carriages because I don’t agree with that,” he says. “You can run grapple carriages on all those machines, some better than others, of course. Any machine with a water-cooled skyline can run them and that’s most machines being used here in New Zealand forests.”

For those that are not capable of running a grapple carriage, Dale says that the cost of a set of water-cooled brakes is around $10,000-to-$15,000.

“It’s not a major job to adapt most towers – I’m talking about those built from early 80s onwards,” he adds.

Like any old machine, there’s always a need for ongoing maintenance, so upgrading with water-cooled brakes and even a new engine to increase power can be built into the schedule.

Dale goes on to say: “Breaking out and manual tree falling are the most dangerous jobs in the forest and there is always the potential for something to go wrong and for someone to get hurt…….or worse.

“That’s why I decided to look at mechanising those tasks. To protect my people. It’s not about putting them out of work – no jobs have been lost since we started introducing these technologies. Those guys are being deployed in much safer jobs elsewhere in the company.”

Asked why he thinks the rate of mechanisation is slower than expected, he says: “It’s a mindset and the willingness to make a difference.

“They are going to have to adopt that technology otherwise we are not going to be able to get people to go on the hills.”

That last point is a reflection of the situation already facing the industry where it’s becoming harder to attract new blood to fill vacancies in forestry, partly driven by the perceived poor safety record. It’s a struggle to convince parents to recommend their children take a job in forestry.

Safety was a key concern when Gareth White decided to put a grapple carriage onto his Skagit 739 100ft tower hauler.

“Getting people off the ground is most definitely a major reason for introducing the grapple carriage,” says Gareth.

“When you’ve got breaker-outs down the hill, at the back of your mind is the thought that something could go wrong.”

It’s been more than a year since he put the grapple carriage to work and he says it is going even better than he first imagined, staying on the skyline in all but the most exceptional circumstances.

And, contrary to what some may think, productivity has improved, not gone backwards. It can pay back in other ways, such as in reduced maintenance, because there is less stress and shock to the ropes and running gear, so they last longer.

It does take time to learn how to use a grapple carriage effectively on a tower, utilising a mobile tail hold to shift the skyline around or using a Live Dutchman setting to create lateral movement, but the more familiar the crews become with how it works, the better it works for them.

In the ten years since grapple carriages first came to market, the technology and reliability has improved substantially. Hauler and swing yarder operators can see the wood on the ground much better thanks to the introduction of high-definition (HD) cameras and there’s now a move to fit multiple cameras on the carriage to give a much broader view of the cut-over.

Nelson logger, Jason Moir, is now on his third Falcon Claw and has used them on a tower and swing yarder over the past nine years and says: “I honestly don’t know how we used to do it (before the Falcon) and these days to get a man to go down a hill to hook up a tree, they don’t exist – so you move with the times or get left behind.

“And this thing (Falcon Claw) doesn’t complain, it just turns up every day and does the job. The last claw we had, before our latest one, we just tipped diesel into it and it did not let us down for one day.”

In spite of the slow progress, Dale says he can foresee a time when all manual breaking out is consigned to history.

“It’s not too far away for us. We are currently working on a project that will eliminate all manual tree falling and manual breaking out.”

For those who have yet to see how a Falcon Claw performs in real life conditions – including a foggy day where the hauler operator couldn’t see the hill from the cab, but saw what he needed from the camera – view these You Tube video clips. 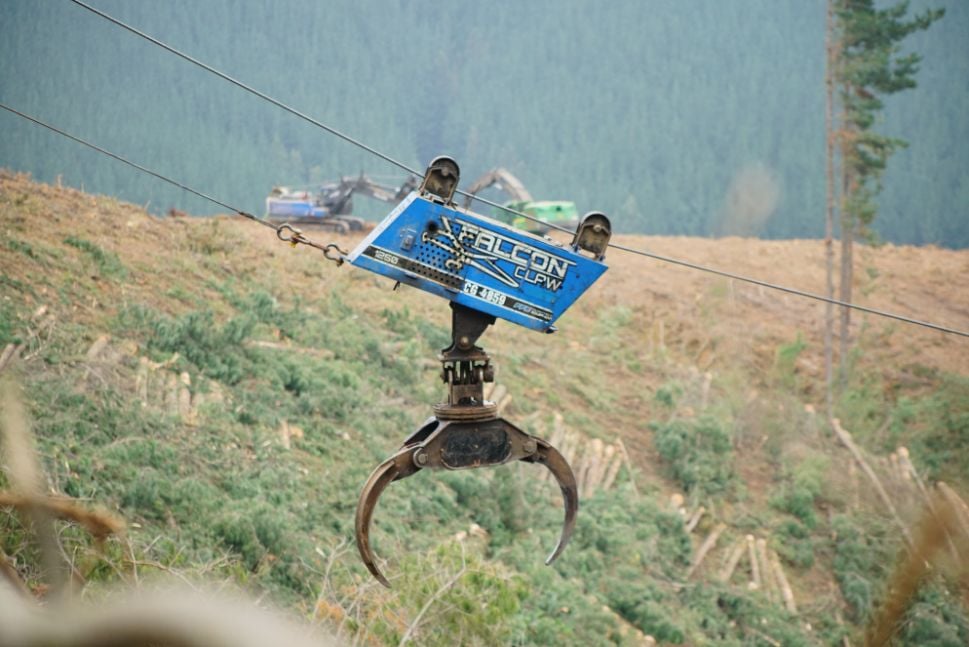 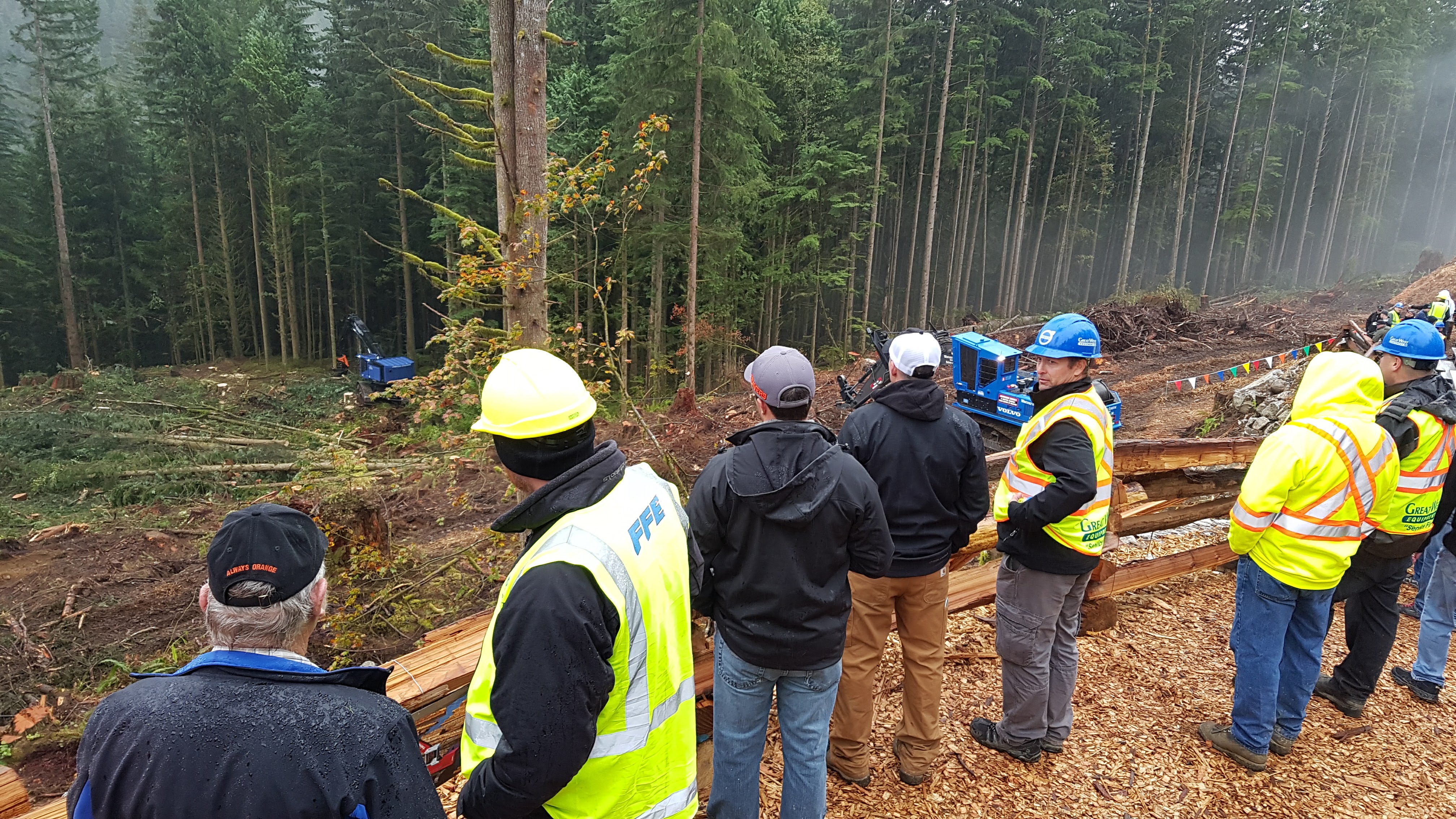